Well this is a little past due, but better late than never, eh?  Rachel and I (Dan) at long last hit the road from our home base near Denver on June 26 and pointed the van north.  This was our first joint trip in the van since the camper conversion work was finished this spring.  We took off with a little over 205,000 miles on the odometer and a shiny new turbocharger whistling away under the hood.

We were generally headed for Glacier National Park in Montana and Banff National Park in Alberta, Canada with plenty of time to stop and play at any interesting places we found along the way.  We had about 3 weeks for this trip before we would return to Denver.  Here’s where we wound up…

We arrived in north-west Montana after a few days of long drives.  Our first stop was the town of Bigfork for a rest and walk around town.  Bigfork sits at the north-east corner of Flathead Lake, one of the largest natural lakes in the country.  All around the lake are cute little towns and tons of cherry orchards and huckleberry farms.  Unfortunately, we were a little too early for huckleberry season, but we did stop at a roadside cherry orchard to pick up a few pounds of that local goodness.  Before rolling onward toward Glacier, we jumped in Flathead lake for a refreshing natural bath.

From Flathead lake, it is only about an hour’s drive to the west entrance of the park at the town of West Glacier.  Glacier National Park however is HUGE, so just because you have reached the entrance might still mean it’s another 2 hour drive to get where you’re going.  We were lucky to have found a great first-come first-serve camping spot at Avalanche campground, a mere 30 minutes drive into the park from where we entered.  We camped here for 4 nights and were able to use this spot as a launch pad to explore various areas of the park.  We shared some nice talks and food and drinks with our camping neighbors.  They were a very friendly bunch (because they were Canadian) with a few very friendly dogs (because they were Canadian and because they were dogs).

Our first hike in the park was right from our campsite, how convenient!  It is an easy 1 hour hike up to Avalanche Lake.  We got an early morning start and were one of the first few people to reach the lake that morning, just in time to see a pair of moose across the lake on the distant shore.  The variety of shades of green in the whole park was really astounding.  We were constantly badgering each other throughout our hikes: “Look at that shade of green!”,  “No, look at THAT green!”.  Even though it was overcast and rainy for most of our 4 days in the park, the moisture on the trees and mosses really brought out even more of the colors I think.  Even the water is green!  This is due to what is called “glacial flour” suspended in the water.  The glaciers that carved out the mountains valleys pulverized the sedimentary rock layers that make up the mountains and crush it into a fine powder.  As the glaciers melt in the spring, this fine flour is released into the streams and rivers.  The flour is so fine that it does not settle or sink and as a result even calm lakes are green.  The deeper the water, the more vibrant the color is.  The green comes from the presence of limestone in the mountains, made up of millions of years of compacted sea shells and underwater creatures from the era when what is now the Rocky Mountains was an ancient sea floor before being lifted skyward by tectonic subduction (+1 for geology). 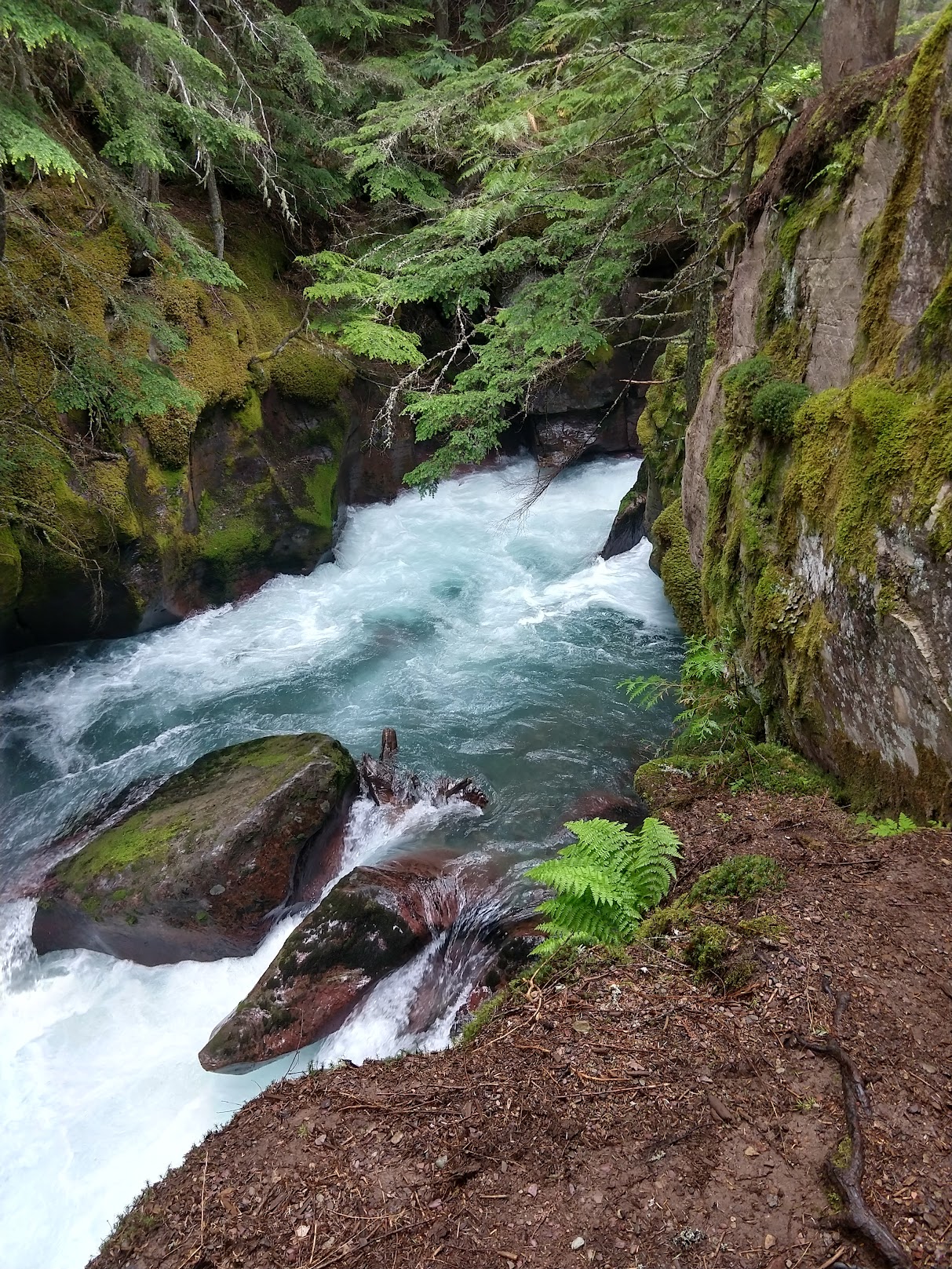 To reach the far side of Glacier NP, one must drive along Going To The Sun Road.  A majestic name for a majestic drive, methinks.  Going To The Sun Road is 50 miles long and winds up and over the mountain range in the middle of the park.  Such is the intensity of the winters up here that the road is not fully open to vehicle crossing until they finish the winter plowing in JULY.  Logan Pass, the highest point on the road, closes again in October.  They say if you drive the road without stopping, it takes about 2 hours.  If you stop at every jaw dropping view (also known as every dang bend in the road) as we did, it takes all day.  The road has some switchbacks so tight that the park imposes a vehicle length limit within which our Sprinter van just barely qualifies.  Instead of a shoulder, fold those side view mirrors in, because the rock cliffs come straight down at the very inside corner of the curves.

We stopped at the top of the road, Logan Pass for a short hike but were turned back by the wind and rain bearing down rapidly, and by the fact that I didn’t think we would need snowshoes for a mid-July hike, but who was I kidding?  Down the west side of the pass, we stopped to attempt a lower-elevation hike at St. Mary’s Lake.  This was a conveniently snow-free jaunt out to the spectacularly green Saint Mary’s Falls.

The mountains here have a looming intensity that is hard to describe.  The upper valley walls are near vertical, towering thousands of feet overhead in a dark and silent gray.  Unlike V-shaped river valleys, glacially-carved valleys have a distinctive U-shape, like the path left by a long, deep pull of an ice cream scoop through a half gallon of Friendly’s Mint Chocolate Chip.  It is hard to see these tremendous yawning valleys and remember that at one point they were filled to the brim with ice and snow and rock.

Due to climate change, all of the glaciers in the park are diminishing rapidly, some which were hundreds of acres back in the 1960’s and 70’s have now vanished entirely.  The park naturalists estimate that by 2030 Glacier National Park will be entirely glacier-free.  If you want to see glaciers in Glacier, go there soon. On our last full day in the park we went to visit the area known as Many Glacier on the north east side of the park, 60 miles from camp (and still in the park!).  From Many Glacier, we went for an intermittently-soggy 10 mile hike. We spotted a moose munching on the shrubbery shortly after starting our way up the valley.  At the top of the valley, we reached Iceberg Lake.  The lake is surrounded on three sides by the headwalls of a half-mile deep valley, like a massive amphitheater.  There is a ring of steep ice around the perimeter and big sheets and chunks in the water.  The ice in the lake glows blue (when orcs are near).  After a brief snow flurry on the descent, we got back to the van at the trailhead and indulged ourselves in a luxurious coin-op hot shower at the Many Glacier village, before heading back across the park via Going To The Sun Road to camp to sleep. 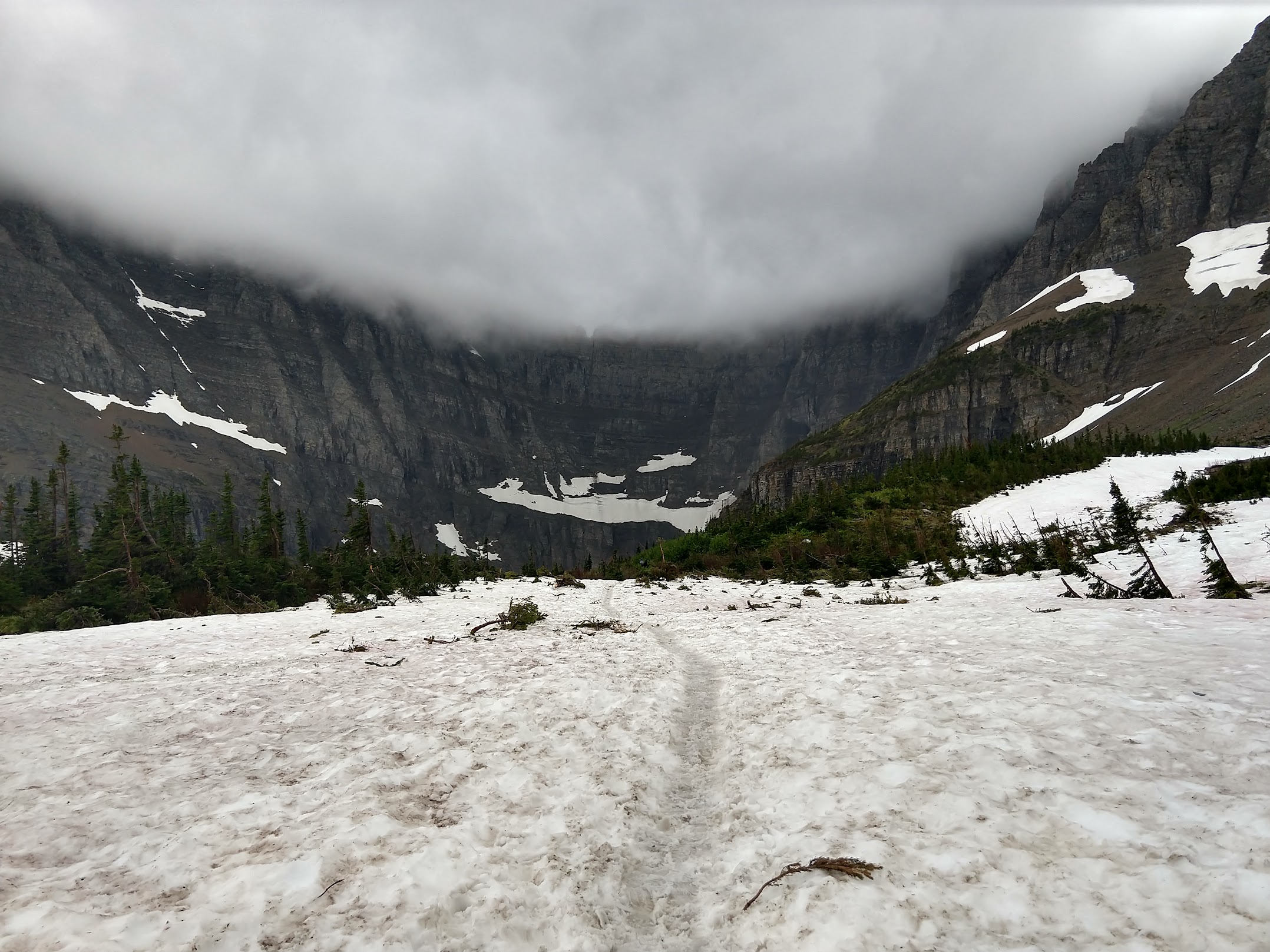 After 5 days in and around Glacier National Park, it was time to roll out.  We packed out of camp early in the morning, swung through the town of Whitefish and then pointed the van northward yet again, gunning for Canada.